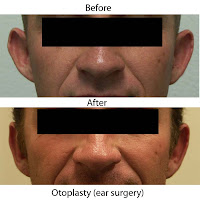 October’s cosmetic surgery highlight is otoplasty – more commonly known as ear surgery, ear pinning or an ear tuck. At Cosmetic Surgery Center in Santa Barbara, we perform otoplasty on a patient of almost any age, even children, as the relationship between the ear and the head will not change as a person ages.

The most common problem related to ears is that they are too prominent, or stick out, from the side of the head. Treatment involves reshaping/repositioning the tissue so there is symmetry of the two sides as well as a more normal relationship of the ear to the face and side of the head. The ear should roughly parallel the plane of the cheek. Too close to the head is no better than too far out.
Another problem that bothers many people is having earlobes that are too large. This can be readily treated in most cases by removing the “extra” earlobe tissue and hiding the incisions under the ear and against the cheek.
Patients who are good candidates for ear surgery are typically extremely happy with the results. See our Before-and-After Picture Gallery of Dr. Perkins’ ear surgery patients.
For an appointment with Dr. Perkins, contact Cosmetic Surgery Center at 805.563.0000.
https://www.cosmeticsurgerysb.com/wp-content/uploads/2016/10/csc_logo_2-300x80.png 0 0 Dr. Perkins https://www.cosmeticsurgerysb.com/wp-content/uploads/2016/10/csc_logo_2-300x80.png Dr. Perkins2011-10-25 20:01:002011-10-25 20:01:00Otoplasty - Ear Surgery - by Santa Barbara Cosmetic Surgeon
0 replies

Want to join the discussion?
Feel free to contribute!

Get Health & Beauty Tips via Email!