Ears that are prominent from the head can be a source of embarrassment for adults and especially for children. Children can be mean and relentless in their teasing about ears that stick out and/or are too large on another child. Otoplasty, also known as ear pinning or an ear tuck, is a surgical process that can reshape and/or reposition the ears so they have a more normal relationship with the head and face.

Santa Barbara cosmetic surgeon Dr. Terry Perkins has performed many ear pinning surgeries on adults and children, as young as 6 years old. This may sound surprising to you but otoplasty can be done on a child as young as 6 or 7 because by that time the ears are about 90% of the size they will be as an adult. The recovery time for an ear tuck surgery is about one to two weeks for a child (and an adult) and can easily be done during summer vacation with plenty of time left to enjoy the summer months.

Below is a picture of an actual patient of Dr. Perkins who had an otoplasty / ear tuck surgery in Santa Barbara at Cosmetic Surgery Center: 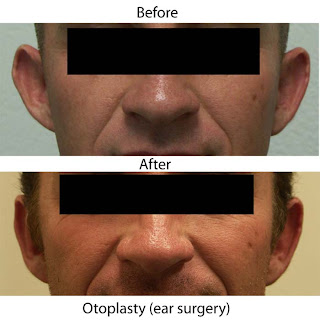 Dr. Perkins can also treat earlobes that are too large. This can be done by removing the lobes the extra earlobe tissue with incisions hidden under the ear and against the cheek.
For more information about otoplasty in Santa Barbara by Dr. Perkins, or to schedule an appointment with Dr. Perkins, please call his office at 805-563-0000. Cosmetic Surgery Center is located in Santa Barbara near to Cottage Hospital.